End the Federal Prohibition of Medical Marijuana
In June, Ohio became the 25th state to legalize marijuana for medical purposes, and three more states may vote to legalize it this November. But medical marijuana is still illegal federally.

Tens of thousands of patients and caregivers across the country face the fear of federal penalties even though they are abiding by state law. We need your help to protect patients’ rights and end the federal prohibition of medical marijuana once and for all.

The Compassionate Access, Research Expansion and Respect States (CARERS) Act, is a historic piece of legislation that would end the federal prohibition of medical marijuana and allow states to set their own policies.

With bipartisan support in Congress we have a chance end the prohibition on medical marijuana, but Senator Chuck Grassley is standing in the way. As Chairman of the Judiciary Committee, only Senator Grassley has the power to bring the CARERS Act up for a vote — and so far he has refused.

Please sign the petition today calling on Senator Grassley to bring the CARERS Act up for a vote. Help us end the federal prohibition of medical marijuana! 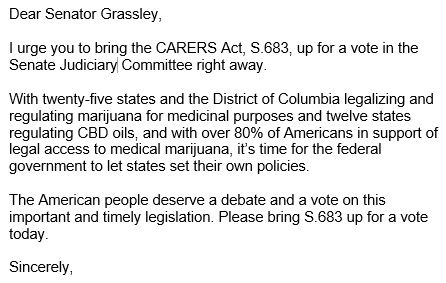 We will send you updates from about the progress of this campaign and related progressive campaigns sponsored by Democrats.com. You can unsubscribe from these updates at any time by clicking the links at the bottom of each email.
[bot_catcher]